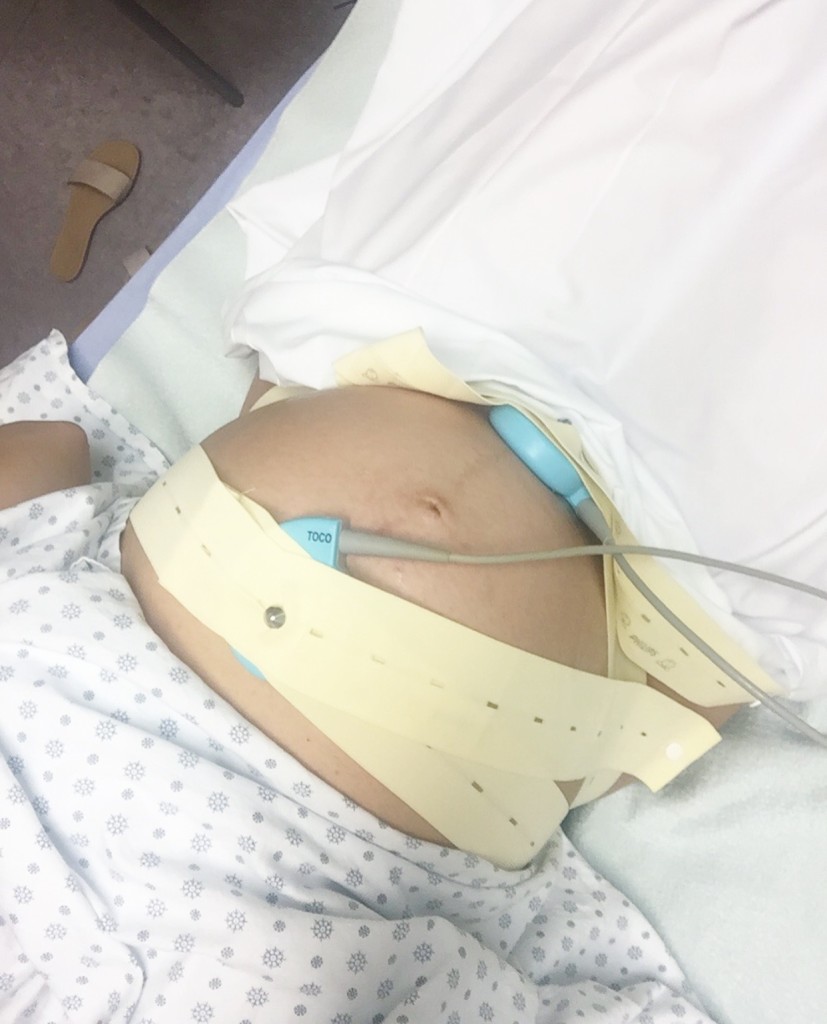 Hey girls, it’s been forever it feels! I cannot believe I am 35 weeks today.  Seriously?  Where the heck has time gone.  For a couple weeks there it felt like time was standing still but after the events we’ve been having lately I don’t want to rush a single second.

If you follow along on snapchat (elenimcmullin) you might have noticed I’ve been having a rough couple of days.  We’ll they sure have been eventful and I have not been feeling well AT ALL.  So where do I even begin? My girlfriend and I had planned a little drive to Southern Alberta together and I was super excited for a little road trip, some snacks on the way down and chatting about all the exciting things going on in both of our lives (she is also exactly 35 weeks pregnant).  We needed to pick up a carseat and decided to stop in at a little vintage market.  The day went well, carseat was ready for pick up and off home we were heading.

While my girlfriend was grabbing the carseat I found myself in some pretty severe pain.  Like pain I hadn’t felt ever before I would say.  My entire stomach was contracted and the pain was radiating from the top of my stomach all the way to the bottom.  I just sat down in the passenger seat and kept telling myself it was going to pass.

She came back to the car and I told her that I didn’t want her to worry but I wasn’t feeling well at all. She looked like she was about to faint (picture being equally as pregnant as me, 2.5 hours from home and you’re worried your friend in the passenger seat is about to deliver in the front seat of your mini van). She kept asking what are you feeling? How bad is it? Then telling me, It’s going to be okay.  I thought I must have been really really hungry so maybe lets stop in Lethbridge and grab me something to eat and see how that goes.  I could manage to eat but I noticed the pain was getting worse and worse and there wasn’t a break in it at all, it was constant which made me believe there was no way they were contractions.  By the time we had to get up to leave I could barely walk myself out.  I couldn’t even reach for my wallet to pay, it was brutal.  At this point we were both starting to worry.

Before we left the parking lot she made me get on the phone with health link and figure out if it was best for us to drive back home to Calgary (2 hours) or head in to the hospital there.  I was afraid of not being with Tim if anything were to happen and even though my in-laws live in Lethbridge I just really needed my husband.  At this point (approx 1.5 hours since onset of pain) I decided to send Tim a little text telling him not to worry, everything is okay, I’m okay, I just kinda feel like I’m dying.  I couldn’t hide it from him just incase, even though I did NOT want him to worry especially being so far from me.  After a very lengthy phone assessment the nurse suggested we get some Tums and head back home and if the pain hadn’t subsided by the time we got there to head into the hospital.

So, I chowed those Tums back like crazy and nothing was happening.  The pain almost felt like it was getting worse and I didn’t have a single second of relief.  Poor Simone.  She was in silent panic mode and regretting leaving Lethbridge and trying her best to stay calm for me.  I’m not sure at what point this was but the pain got SO bad I had to get on my hands and knees in the front seat of her mini van.  She kept asking me, “Do you think you’re in labour” and I said, “There is no way.  There isn’t a break in the pain, I know how labour presents and this isn’t labour”.  Within a matter of two seconds I turned to her and said, “OMG I’m scared i’m in labour”.

Just take a second and try picturing two almost 35 week pregnant girls racing down the highway, one dying of pain the other dying of panic.  Ugh, I felt so bad!

Then, miraculously somewhere just before High River (if I remember correctly) the pain just stopped.  Like suddenly just went away like it hadn’t have even been there.  I couldn’t believe it.  I text Tim and said, okay it’s gone! Go back to work, don’t worry about me.  Simone wasn’t having any of that and took me right into the hospital where Tim obviously met me. I just hated being the dramatic overly worried pregnant person but I kept reminding myself just how severe that pain was and the health of my baby was my number one priority.

We went up to labour and delivery and I apologized as I told them the pain was gone but it appeared they weren’t letting me go anytime quickly.  Before I knew it I had a bed, hooked up to monitors and was preparing for an overnight on L&D.  At this point I was having frequent contractions.  The baby’s heart rate was good and that gave us some relief but everything else had us a bit worried.  I knew Braxton Hicks are super normal but if you saw the monitors it was going up and down and up and down and up and down…  The doctor had to rush into an emergency c-section so we just waited for a little bit.  I was so confused why they were keeping me because the pain was gone but we asked if we could go because the baby was okay and they said no because they needed to figure out what was going on.

Tim and I went and grabbed a little snack and as soon as we got back the doctor came to explain everything to us.  She sat on my bedside and said that we shouldn’t worry and if baby girl comes right now she will be fine and I’m far enough along where she might not even need to stay in the nicu and things were going to be okay.

I was not ready for baby to come.  Serious, reality check.

She talked to me about giving me a steroid shot to help further mature her lungs and then checking to see if I was dilated.   After talking with the Obstetrician they decided that I needed to stay a little while longer.  I wasn’t dilating but they wanted to check again in a little bit to make sure it wasn’t progressing and she described everything that was happening as “threatened pre term labour”.  Tim and I just sat there so confused about everything that was going on.  The contractions were still happening just as frequently but I wasn’t feeling anything other than tightening here and there.  By early morning they decided that it was safe for us to go home and get some rest but I would have to return the following night for my second steroid shot.

Perfect.  A simple shot the next day, I’ve got this.  I woke up after catching up on some sleep and my feet were literally the size of my thighs.  Of course, being the worrier that I am, I start to panic that its pre-eclampsia.  I rush to check my blood pressure and it’s still low normal, heuf.  But I couldn’t walk because the pain in my one foot/leg was so bad it had me in tears even trying.

My injection was at 10:30 pm and I was so excited to get it over with so I could hop back into bed and make up for whatever had happened the day before.  Once we got there, they put us in a room and the nurse came in to give me my shot.  After assessing me she decided that the doctor needed to see me and baby needed to be monitored.  Here we go, another night on L&D.  At this point I am exhausted and just needed to be in my bed.  I quickly fell asleep, Tim in the chair next to me peaking every so often to make sure baby was doing ok.  He told me I was still having some contractions but nothing like the night before.  The doctor came in, woke me up and told me it was safe for us to go home.

What the heck had just happened?  I felt really unwell at this point but I was guessing it was because I was completely sleep deprived. I spent the entire next day in bed with my legs up swollen as can be.  The doctor explained it was a result of the steroids and should resolve (even though I’ve been super swollen lately…like my shoes don’t even fit me! Not good in cold weather).

Today they sent me in for an ultrasound and I also saw my low-risk maternity doctor who said baby was doing very good.  The ultrasound showed that everything was wonderful and baby was doing so good and the radiologist just said it was “threatened pre-term labour”.  The nurse caring for me the first night said this happened to her at 26 weeks and she didn’t deliver baby until 41 weeks! So let’s cross everything this happens to us.

Well, if anything I can say I sure wasn’t ready to deliver her just yet and it helped me realize that.  I have so much I need to get done and I seriously went into complete panic mode.  My goals for this week are to get baby and mine’s hospital bags packed, finish up all work I have to do and get myself some rest.  There is no way I can effectively deliver this baby feeling as exhausted and unwell as I do.

Now that was a lengthy one! Thanks for reading if you still are (haha).

I’m just so grateful for your love and support and everything you guys have offered to us during this journey.  We feel so beyond grateful to be able to have you all here supporting and loving us during such a special time in our lives.  Even the not so pretty moments.  So much love to each and every single one of you.  Hugs, E xx.