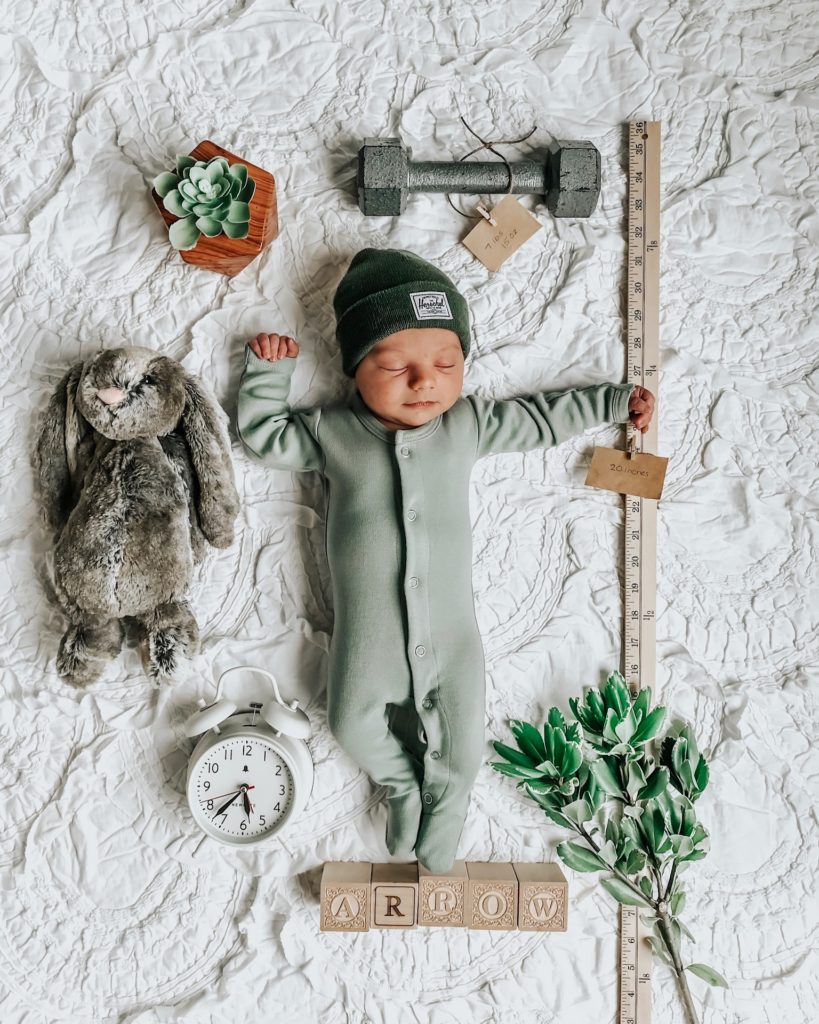 I’m writing this post to offer hope to anyone experiencing infertility.  I leaned on stories like mine to help me survive some of the darkest days.  The days bawling on the bathroom floor night after night consumed by a pain so hard to explain but if I had to choose one word it would be: debilitating.

Not wanting to get out of bed in the morning because you feel like a complete failure. Feeling like your body has failed you month after month. Feeling like you’re not capable of doing what woman were created to be able to do if they chose motherhood was for them.  Feeling so out of control you would do absolutely anything in the world just to be able to have some sense of control.  Feeling so isolated and alone because no one really understood the fear that consumed your entire soul.  The fear of never becoming a mother.

I remember never wanting to admit it to a single human being.  I was infertile, something i feared my whole life and had become  my reality.  I never understood why I was so afraid other than part of me always knew I’d be facing it someday.  I was so ashamed and disappointed in myself which is absurd because I had absolutely zero control over what was happening.

When I finally got pregnant with Harlow it was so hard for me to not have extreme feelings of guilt.  Guilty some women who were trying way longer than us still weren’t blessed with a baby. Guilty we were able to do IVF. Guilty IVF worked the first time around even though we only had two embryos.  I wanted to take that pain away from every single person who was still feeling it because I knew the pain but even more because I knew the joy.

Once she was in my arms I wanted to do everything in my power to encourage women still struggling to never give up.  I always leaned on success stories to give myself hope even though I never thought it would happen for us.

If you’re still longing for your baby, continue to promise me you won’t ever give up.  If you’re fighting for adoption, keep fighting.  If you’re on your tenth round of IVF,  make sure you try an eleventh.  If you want to continue trying naturally then make sure you keep trying over and over again.  I need everyone to fight for their babies because I know the fight is so worth it.

The thought of ever having another baby was honestly traumatic for me.  There is no way I could ever go through that again, the negative after negative. Waiting upon waiting.  I had come to peace that I would be a mother of one, not because I would ever choose that for myself, but because I never thought I’d be blessed with one baby, let alone two.  I was scared because infertility had left dark scars.  Infertility was traumatic for me, it honestly broke me.

When I found out I was pregnant with Arrow I had never been so shocked in my entire life.  I was undeniably happy but those same feelings of guilt surfaced again.  How was I blessed with not only one baby, but now another? How were so many women still struggling for that love I once longed for myself?

Our timing is all different.  Some get pregnant the first time. Some are never able to get pregnant.  All equally amazing human beings.  I’m writing this hoping you can grant me some grace because I still feel guilty and I’m still managing those feelings. I understand the pain but I hope you can use this story to manifest feelings of hope instead of suffering.

The story of Arrow Cove:

We had just returned from Greece and Harlow had just celebrated her first birthday.  We had been preventing pregnancy since she was born which sounds funny for a couple who thought they’d never get pregnant naturally but I’ve heard all the stories and given Harlow’s demeanour there was no way I could survive another baby anytime soon.

Tim and I had decided when she was 14 months that we would stop preventing it and seek another referral to the fertility clinic.  We would try to transfer the next embryo and if that didn’t work we would evaluate what to do next.  I was so scared. I didn’t know if I could do it ever again.  The feelings alone were too much.  Our doctor sent in the referral.

Two nights in a row I got this unreal feeling I was pregnant.  I had cramping that was only familiar from when I was first pregnant with Harlow.  I had to stop a workout because I just felt so uncomfortable.  Tim thought it was impossible and that I was crazy.  We went to the mall to pick up a gift and I ran into my friend and explained to her this unreal cramping that I had from walking alone.  It wasn’t horrible pain or anything but I literally never got period cramps so I was really thrown off by it.

As soon as we got into the car we had a call from the fertility clinic.  They could see us at the end of the month.  I muted the phone, told Tim, we both agreed it was SO SOON, but to accept it and go from there.

We were laying in bed for the night (literally 10:45 pm) and I told tim I needed to sleep tonight so I asked him to run to the store to put my mind at ease so I could get some rest. He went, made it in time (store closed at 11) and returned home with a pregnancy test.

I peed on the stick and he held it for the first time in all the tests we had ever taken.  He was so afraid of how I would feel when it said “Not Pregnant” and I promised him I wouldn’t be upset.  That’s when I heard him say, “Oh my God!”  I just knew it.  In all the tests I’d ever taken never had I ever had a feeling it was a yes other than this time.  We hadn’t even tried how the hell were we pregnant?

But if it wasn’t for infertility there would be no Harlow.  So today and everyday I am beyond grateful for infertility.  Who knew I’d be saying that someday, but my heavens is it ever true.  I have learned patience, grace, compassion, empathy, how to be so happy for someone else who has everything you are longing for.

If I could offer anyone struggling advice it would be to seek hope in success stories and to truly find how to be happy for other  people who have want you want.  This is the only thing that offered me peace during those horribly dark days.  Instead of allowing myself to feel jealous I truly felt happy for them.  The amount of peace this offered my soul is what I feel helped heal me in a way.

How was your pregnancy with Arrow?

Oh boy do I ever love that little nugget and thank heavens I do because it was a HORRIBLE pregnancy.  I’m trying not to complain but it was debilitating.  My hcg levels were extremely high that I found out I was pregnant a week before my missed period (well six days given it was 11 pm). I threw up all day everyday, only ate french fries and vegan gravy and chips for four months. EVERYTHING made me sick. I’m so shocked I wasn’t malnourished because it was awful.  I ended up needing IV fluids and medication because it was all too much.  I slept all day and all night and Tim and harlow survived on cherrios and smoothies.  Talk about MAD mom guilt.  I remember being “Sick” with Harlow’s pregnancy and thought hyperemesis gravidium was a bit dramatic…look whose laughing now.

Was it hard managing a toddler and being pregnant? Any advice?

Well the first four months I was MIA so no advice there.  I would lay in bed with her and read books and cry because it was so bad.  I would throw up and pee myself all at the same time and she would be so worried and Tim would explain to her that mommy was growing a baby sibling for her and wasn’t feeling well.

At around 5.5 months pregnant Tim’s work season started again and I was feeling better by month 5. Thank heavens if not who knows what would have happened.  The bigger I got the harder it was to do all the cool mom things I used to do like jump on the bed or play in the sand but I learned how to deal with some of those feelings of guilt.  Gosh did I feel guilty.  She had the best summer though and didn’t realize I was so huge I don’t think.

Did you have another c-section? How was your delivery?

I was able to have a successful VBAC and the experience was completely different this time around.  Also, the contractions.  Never had those before and not sure how nobody told me how painful they actually were.  Those poor nurses.  I swore more that day than I had my whole life.  The contractions were all in my back and bum and back of my thighs and wouldn’t let down.

Did you do IVF again?
No we didn’t.

What was Arrow’s name inspiration?

I had loved the name Arrow for Harlow but Tim loved Harlow more.  Our girlfriend had sent us a list and Harlow was on it and he fell in love with it.  I was Nicole Richie’s biggest fan (haha) so I felt inspired by her daughter and clothing line so we went with Harlow leaving Arrow available.  Funny enough her second baby was a boy and his name was Sparrow but I found this out after.  Then when we had a list of boy names for Arrow but Tim was so set on Arrow and it just felt right.  I have a list of 20 boho baby names if anyone is interested in something wild haha.

How did Tim react to having a baby boy?

I feel like I should let him answer this one haha.  He really thought it was another girl so I think he had to figure out those feelings first but once he did he was extremely happy.  We honestly didn’t care what the sex of the baby was and now that he’s here we couldn’t IMAGINE not having him.

How is Harlow adjusting to being a big sister?

Okay, whenever we told people we were having another baby they all would say, “Good luck with Harlow!” and they were serious.  She is a mama’s girl.  She is a bit demanding and emotional (is it because she’s 2 or female?). We were so worried.  When he was born we were BLOWN away with how she responded.  The second she met him she loved him. She loves him so much she thinks he’s her baby.  Whenever he cries she screams “Oh no baby is crying” and grabs him his soother and says, “Here you go baby”.  Every night she has to kiss him goodnight.  We sit and watch him together saying, “Hi bubbub”.  This is what Tim calls her so naturally she calls him that.  It honestly has melted my heart and I’m SO proud of her and her adjustment.

Will you have another baby?

Oh gosh.  I didn’t even think I’d have one, let alone two! We are extremely happy with where we are right now but who knows.  For now we are happy with two.

Were you nursing when you got pregnant?

Thanks for reading loves, 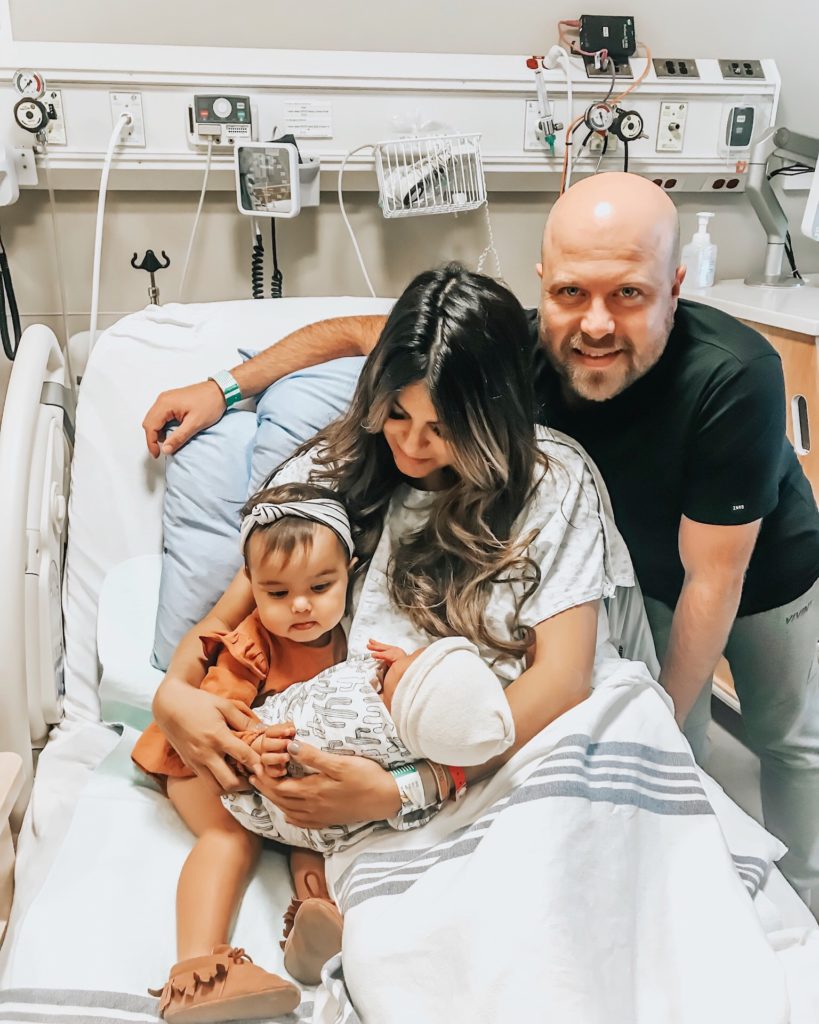 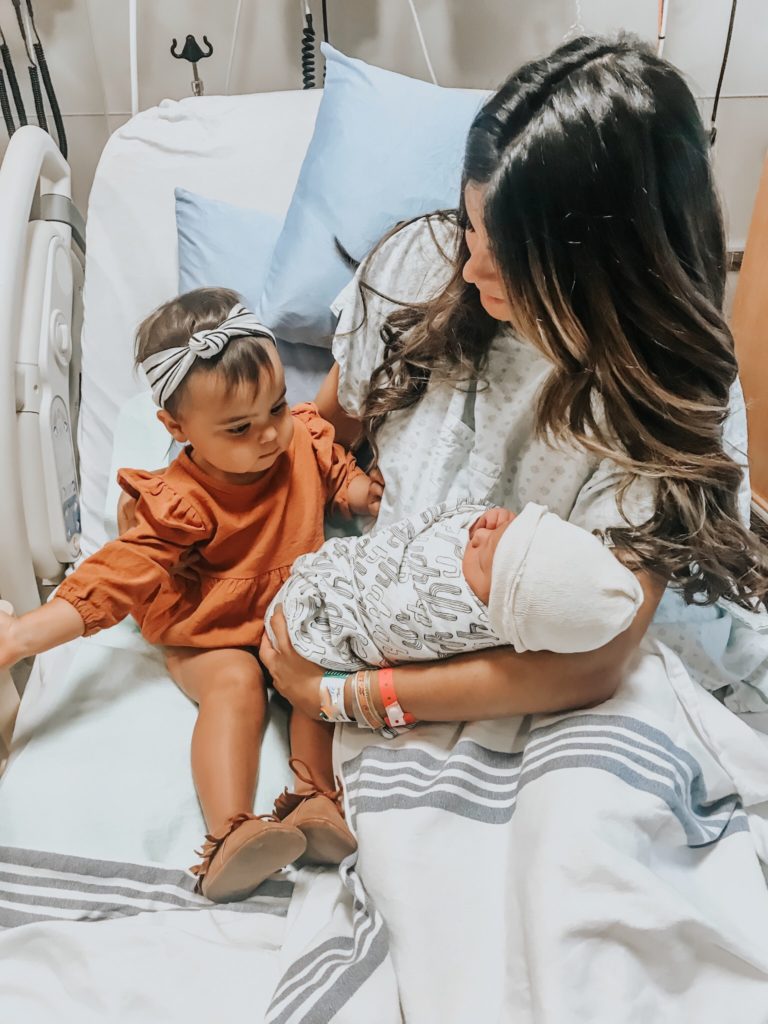 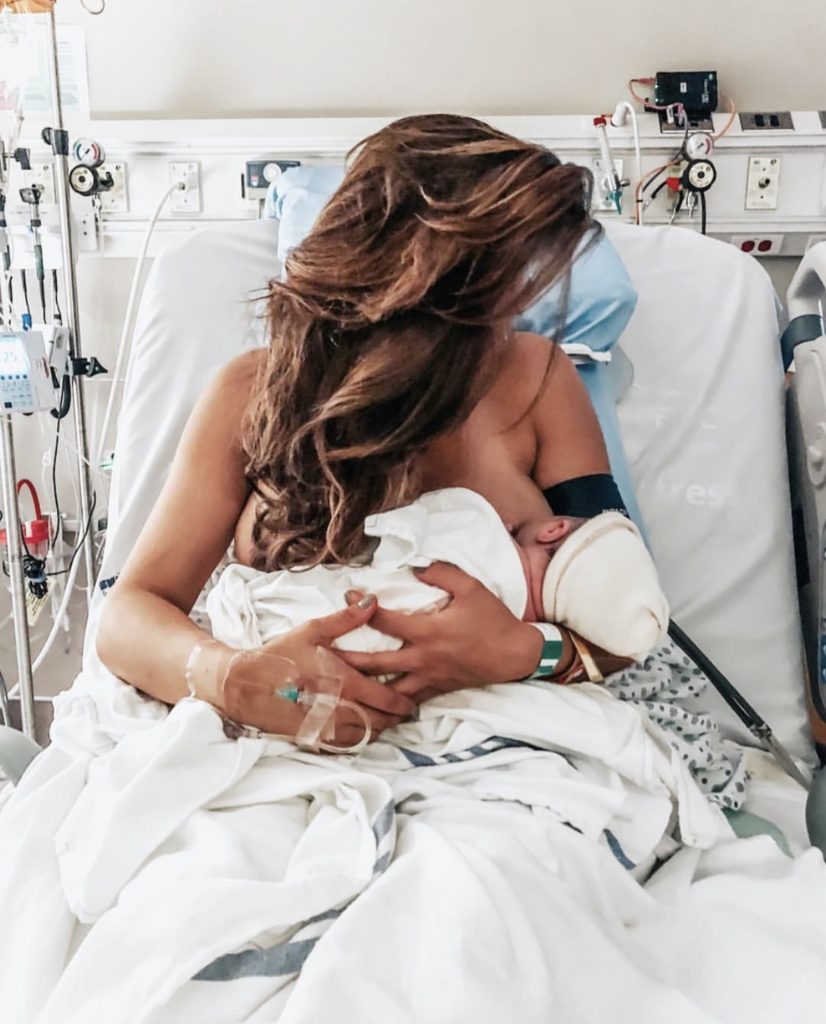 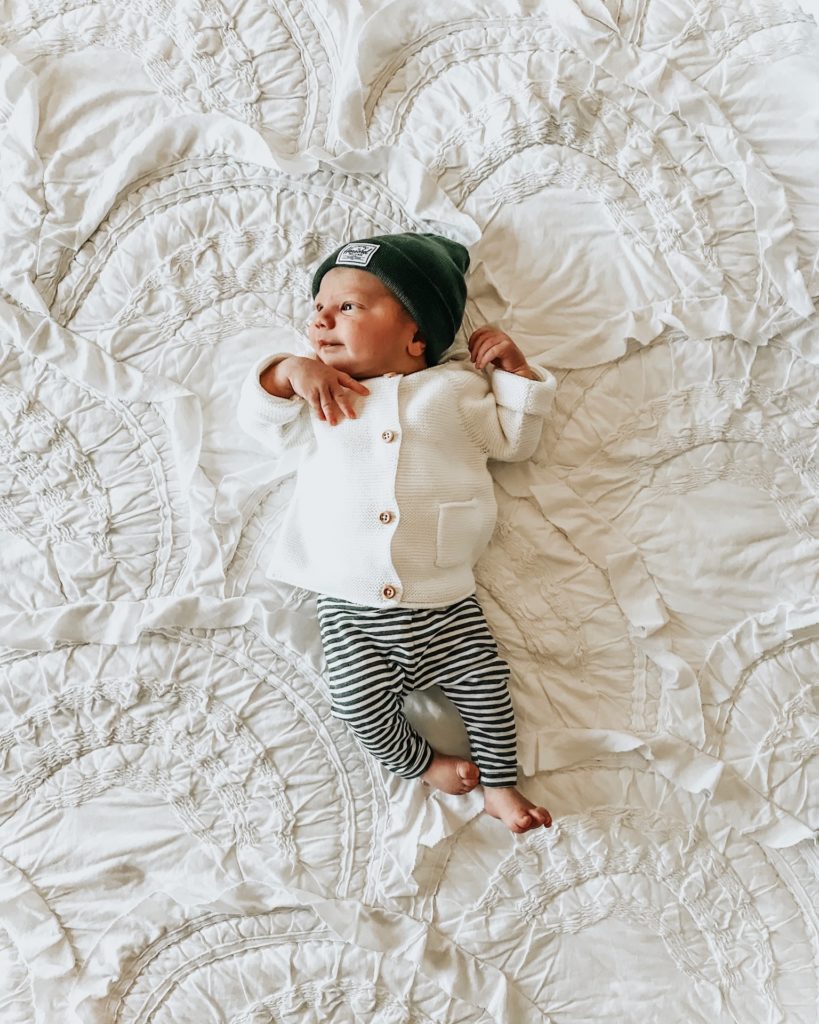 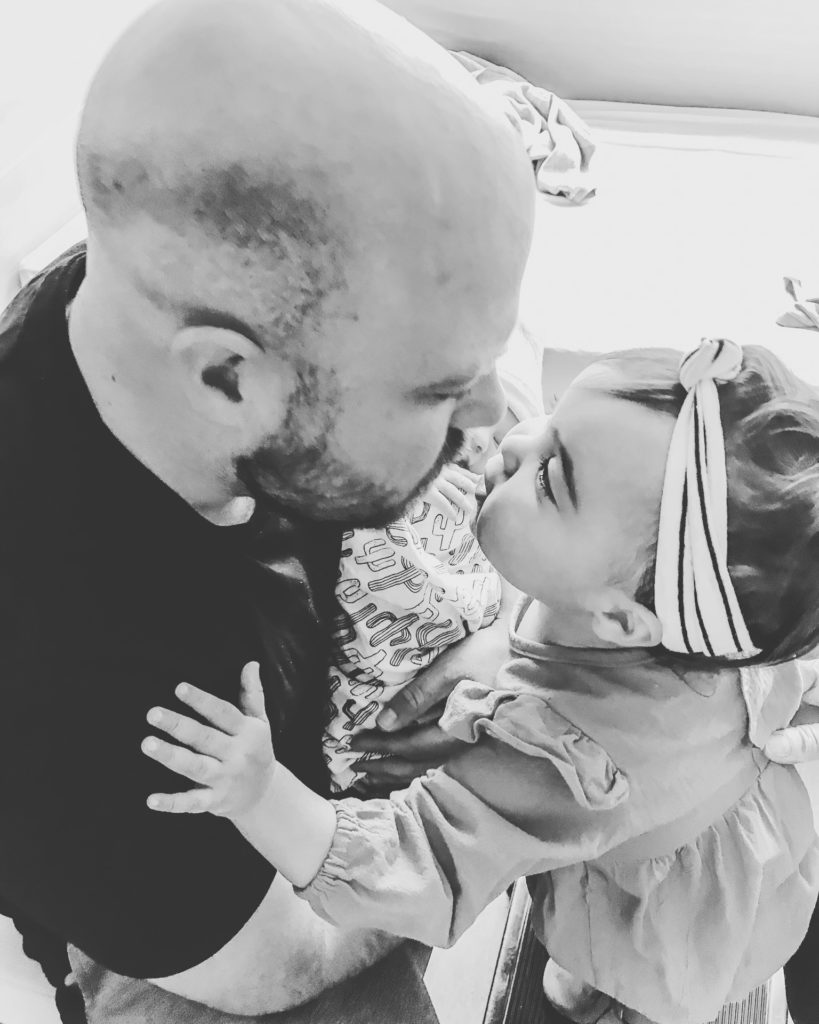 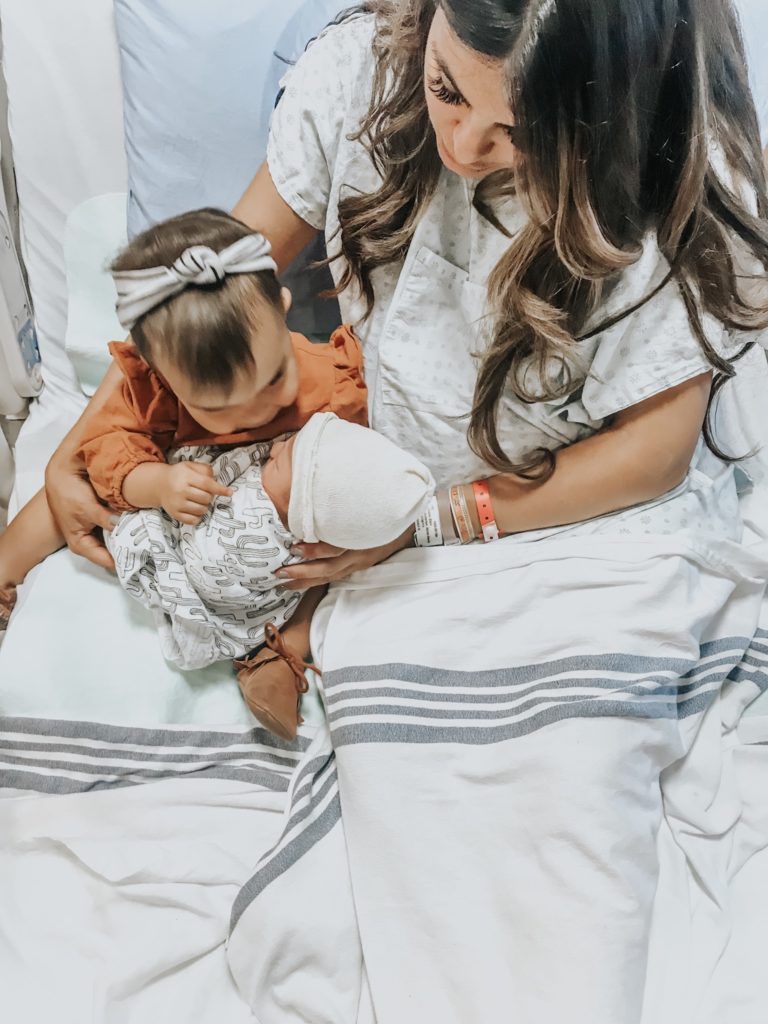 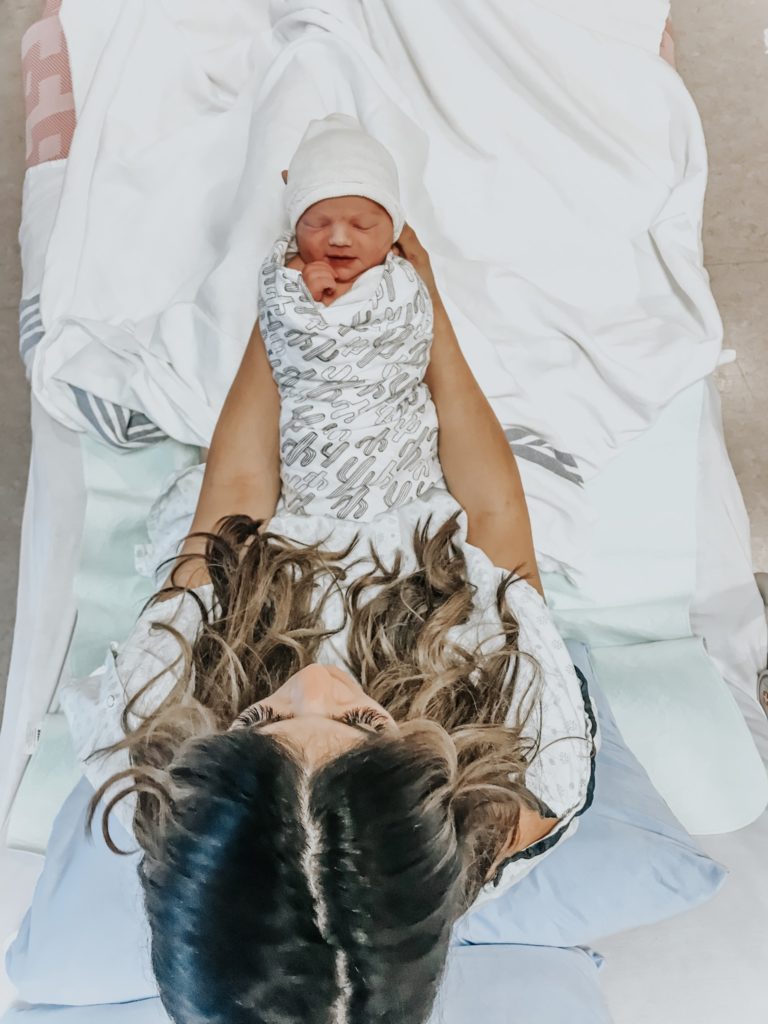 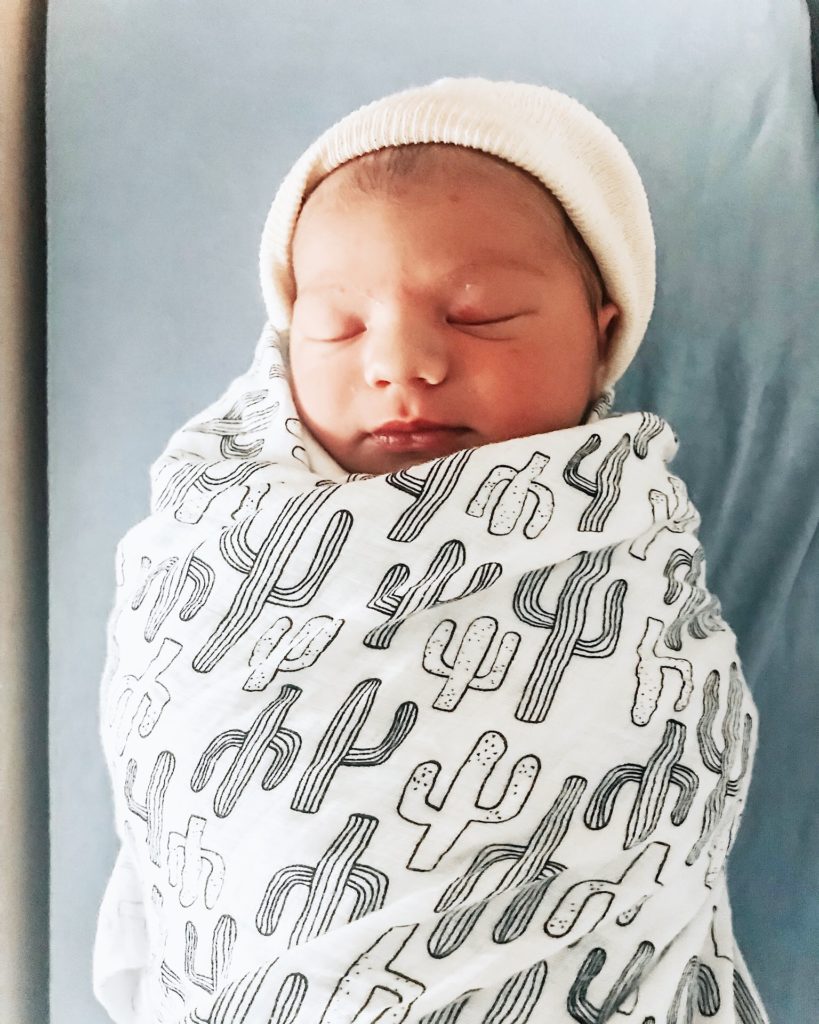